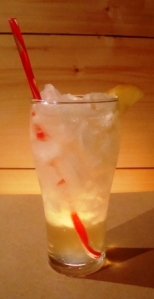 This is an extra-spicy, alcoholic ginger beer, with an addition of traditional Jamaican roots wine. Ginger beer was once a staple of British households, often potent as Porter, but miraculously free–or a few pence a gallon. For more than 100 years ginger beer, made from ginger, lemon juice, cream of tartar, sugar and water, was coaxed into life by an symbiotic fermentation community called a “ginger beer plant”. No one knew what it was or how it worked, but, like sourdough starter, these “plants” were passed down among families and friends.

In the late 1800s the responsible organisms were identified: Saccharomyces florentinus and Lactobacillus hilgardii. Along with its resemblance to the sourdough fermentation agent, a ginger beer plant is also like the komboucha organism. These are all combinations of fungus and bacteria that live and work together, much as does the familiar lichen (fungus and algae.) Unless you have a great-aunt in Yorkshire though, an authentic ginger beer plant can be hard to come by, though there is at least one online source. This source claims to offer a descendent of the pure strains isolated in the original research into its composition.

While pedigreed ginger beer plants are rare and expensive, several sources offer instructions on making your own. Success depends on what organisms are living naturally on the ginger root, as is the case in making chhaang yeast balls. In his 1963 book Home Brewed Beers and Stouts C.J.J. Berry suggests using ground ginger and bakers yeast obtained from a bakery.

Today’s hyper-clean supermarket ginger has failed to provide me with the necessary ingredients. Instead I’ve taken a different tack, forgoing whatever sourness the lactobacillus might contribute, and substituted Lallemand Windsor ale yeast, known for its fruity fermentation characteristics. As I wanted a ginger beer that was quite spicy, I used about 66 grams of fresh grated ginger per gallon. Since this was a Jamaican tribute, I used demerara sugar together with lime juice and zest. Instead of the cream of tartar called for in conventional recipes, I included wine-grade tartaric acid which dissolves more readily.

To atone for my blasphemous use of commercial yeast I added Roots Wine, at a rate of one ounce per gallon. These are legendary Jamaican tonic drinks, purported to increase vitality, strength, and “go-power” particularly among men.

Brands seem to come and go, with Baba Roots a recent market leader. Mandingo appears to be the latest drink darling. Of those I have tried “Natural Vibes” has been my favorite, but it is evidently out of production. In any case, the addition of a small amount of one of these tonics adds a mysterious background note to the ginger beer that combines smoky aroma with tart, tangy and sweet tastes.

While ginger beer made in this way ferments out very dry, it is far better when it has been sweetened a bit to taste. I have tried mauby syrup with good results. Agave nectar and raw sugar syrup also work well. Jah Guide Protek I&I.