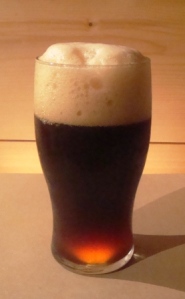 This is a heavy one, and definitely a keeper. I wanted a barley-wine-style ale that I could age for ten years, to see how it develops. Oaked Burton was brewed in August, 2008, and it’s maturing very well.

My original tribute to the legendary Ballantine Burton Ale, Oaked Burton derives its name from the tincture, made from a half-ounce of home-toasted oak chips soaked in Everclear, which was added to the secondary fermenter. Significantly, this addition boosts the ABV by almost a point, to about 9.4%.

Oaked Burton pours a medium brown with hints of gold; almost an extreme amber. It has a tan, long-lasting head that leaves very little lacing on the glass. The aroma is malty, with hints of oak. The taste is of malt, with caramel, almonds and dark fruit like plum. Roasted grain, oak, and mild alcohol dance in the background. It finishes with a hoppy tang, oaky astringency and an alcoholic warmness.

No one is going to age a commercial beer for ten years these days. The era of the ancient barrel-aged Ballantine is over. But a home-brewer can certainly put a few bottles away for five years, and ten is only double that and well worth the wait–if you’ve got some West Coast Amber to tide you over in the meantime.