The Cascade Mountain Range extends from Southern British Columbia through Western Washington and Oregon, into Northern California. Part of the Pacific Ocean’s “Ring of Fire” its highest peak is the volcano Mount Rainier. To its west are the hipster havens of Seattle and Portland, famous for some of the finest craft beer in the world. To its east lies the fertile hop growing region of the Yakima Valley in Washington. South of Portland, at the western edge of the Cascades, another stretch of fine hop farms fills the Willamette River valley.

The Cascade Range and its surrounding hop and barley farms form the mythical country of Cascadia. A generous cartographer would include the barley-growing regions of the Columbia Basin, and the Palouse, stretching east and south from Spokane, Washington. It also makes sense to declare San Francisco an honorary member among Cascadia cities, for it is the birthplace of the modern craft beer movement in the United States, thanks to the visionary efforts of Fritz Maytag and his Anchor Brewing Company.

The strains of hops developed in Cascadia, fittingly often begin with the letter “C” themselves. The “Four C’s” as they are sometimes called, are Cascade, Centennial, Chinook and Columbus. More recently Citra ™ has joined the group. They are dominantly bright, piney, citrusy and resinous in taste and aroma, and form the basis of most American India Pale Ales. Recently, they have been incorporated into a style known as Cascadian Dark Ale.

As hop and barley production began to ramp up in Cascadia during the 1980s, another development took place 180 degrees away in the Ring of Fire. Japanese brewers were early to recognize the potential for product differentiation offered by creating all-malt lagers in their commercial operations. Kirin and Sapporo led the way with premium “black beer” (黒ビール), featuring roasted malts and a sweet finish.

The Cascadia Black Lager shown here pays homage to both sides of the Ring of Fire. It is hoppy (40 IBU) like a Sierra Nevada Pale Ale, slightly roasty like a dark ale, with mildly sweet maltiness like Japanese black lager. It uses the San Francisco lager yeast to keep the finish drier than a typical ale. Cold-infused specialty grains, including debittered Carafa II, Munich malt and Breiss Special Roast maximize flavor while keeping away excessive burned harshness. A nice thick head leads to a moderately full mouth feel, and its 5.7% ABV is assertive, while keeping it well within the range of sessionability for the discerning and determined tippler!

WHAT IS THE UMAMI FACTOR?

It’s two things. It’s the title of my new book, and it is the principle for making fermented beverages that provide a complex, mouth-filling, satisfying flavor sensation by balancing multiple aromas with the five tastes: sweet, sour, bitter, salty and umami.

Umami is the taste sensation of savory foods. The word is Japanese for “delicious” taste. It’s provided by receptors in your mouth, throat, esophagus, and even stomach that detect the presence of glutamates, which are derived from amino acids. The umami sensation is pleasant for the same reason that “sweet” is pleasant.

The body is cued to detect vital, high-engergy nutrients: carbohydrates with sweet taste, and proteins with umami taste. Natural, unfiltered fermented beverages are packed with umami-producing compounds from the fruits, grains, and yeast they are made of.

WHAT IS FULL SPECTRUM FERMENTATION?

Full-spectrum fermentation describes a process of techniques combined with intricate ingredient formulas that create complex flavor arrangements evoking the response “There’s so much going on there! How did you do that?”

Full-spectrum beverages are complex and improbable, but ultimately well-balanced drinks.

WHY IS THIS BOOK DIFFERENT?

It takes a full-spectrum look at beverages from soft drinks to hard liquor. It thoroughly discusses the components necessary for flavor balancing. It examines related spectra, such as the inebriation spectrum and the commitment spectrum. It has a textbook approach to data, with a multitude of tables for ingredients and supplies. It provides recipes and detailed instructions, but more importantly it is a call to chefdom for aspiring fermentation artists. Tally Ho!

The recipe uses floor-malted Bohemian Pilsner malt, made from Bohemian spring barley. This malt shows a wider color range among individual grains than malt processed by modern pneumatic malting methods, with their tighter temperature control. The result is a fuller malty flavor, with a bit of residual sweetness. It is slightly under-modified however, and will benefit from an acid rest and protein rest.

The mash bill uses 3% acidulated malt to lower mash pH, in the German manner, which prohibits additives such as organic acids to do so. In soft water this is enough to bring the pH down to about 5.2 in a full-grain recipe.

Munich malt contributes a mild toasty bread flavor to the brew. Carapils is a high dextrin malt that provides foam stability and full body to the beer while adding very little flavor.

Because the starting gravity is a bit above the high-end of the range typical for North German Pilsner (which is around 13 Plato), the hopping rate is also a bit higher than the typical example (which is 35-45 IBU). 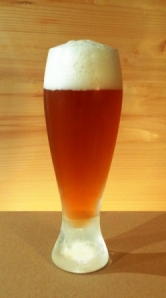 There’s a phrase that goes “There’s no such thing as a free lunch.” That was not always the case. Back in the day when a mug of beer was a nickel, there WAS a free lunch. And it came with a pilsner beer that was about six percent alcohol. “Six point” beer pretty much disappeared after the great American experiment called Prohibition. Here that tradition is revived with Sixpoint CAP, a Classic American Pilsner.

This all-grain CAP version uses American six-row barley malt for historical accuracy, as well as a touch of grainy sweetness. Because it is higher in starch-converting enzymes, six-row malt is able to transform the other key ingredient in Classic American Pilsner: corn grits. This is an East-Coast Pilsner recipe, by the way. If it were a West-Coast recipe it would likely substitute rice for the corn, giving a dryer, more neutral flavor.

More specifically to this particular recipe, the corn grits are substituted with polenta, which is not processed with an alkali the way corn grits are. The result is a bit of added corny sweetness that is subtle but definitely there. I used Golden Pheasant Polenta from South San Francisco.

The grains are mashed using the American Double mash schedule. Essentially, the corn grains are boiled to gelatinize them, and this boiled mixture is added to the main mash to raise its temperature after a half-hour saccarification rest. The raised temperature completes the conversion of the cornmeal mush.

A smooth Pilsner needs nice soft water. This one is brewed with Southeast British Columbia mountain branch water. I like calling it branch water. It gives it a classic American vibe.

Classic American Pilsner exhibits a refreshingly bitter hop character as well, from the generous but scrupulous application of Noble hops from Europe. For this recipe, first wort hops are added to the runoff, in this case Saaz. Cluster hops add bitterness and Tettnang are used for flavor.

The beer was fermented with White Labs San Francisco yeast, but any good dry-finishing lager strain would do, as long as the fermentation temperature doesn’t get higher than 60F. When fermentation was nearly complete, this batch went into the refrigerator in a carboy for 12 weeks of rest at 38F (3.3 C). With another 12 weeks in the bottle at cellar temperature, the result was a tasty, corny, stony beer, the kind you would have loved if you were twenty-two in 1922.